Meet Bob! Bob is the sweetest Havanese you will ever meet. He is not clingy, and he is very self-amusing (he'll get toys to squeak and toss about some, but he doesn't want to play fetch), and he is really happy and bouncy when it is time for a meal. 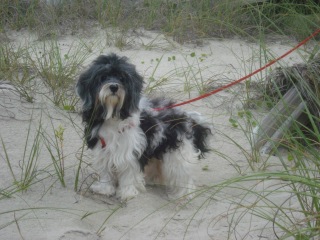 and watch what you're doing. His absolute favorite thing of all is when you scratch him behind his ears - he becomes catatonic with his eyes blissfully closed.

Bob does not have an aggressive bone in his body, and he gets along fine with kids (ignores them), other dogs, and he is particularly good at going out to eat. He curls up at your feet and doesn't beg or fuss.

Bob is a delightful, goofy 9 years young. He really wants everyone to know that he is ONLY 9; he has a lot of life left in him and will be a faithful companion to you for many years to come. He had cataract surgery at the end of January on his right eye and he can now see well enough to do stairs, hop on and off the bed and find the toys he

particularly likes. He will even run after the other dogs and I think he thinks he is playing with them, though I'm not sure they would agree. He is very smart and a bit naughty - when at the beach for the first time, he decided that he wanted to eat a starfish that was on the table.  We took it away and put it up. The next time we were at the beach (two months later), Bob waited until no one was watching and he went right over to the table and crunched up the starfish.  He had remembered it was there, and he still wanted it, but he was clever enough to not take it while we were watching him.

Bob is approximately 15 pounds, housebroken, and is current on his vaccinations. 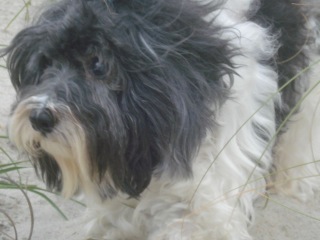 He will need to have a follow up eye appointment with an ophthalmologist in September, and then if he gets a good report, he shouldn't have to go back for another year and then annually thereafter. Cataract surgery was not an option for his left eye because the optic nerve was damaged when he had secondary glaucoma from a luxated lens.

Bob's happiness shows in his ever-wagging tail and he is eagerly awaiting his forever home. The transition may be easier for him if his new home has another dog, he has always been around another dog and when he has been alone, he seems a bit worried about understanding what the routine is.

Bob is being fostered in NC.

A donation will be requested to adopt this dog. The recommended donation amount will be based on the dog's age, and medical and behavioral issues, if any.  A completed application is required if you are interested in adoption. Thank you for considering a rescue dog!