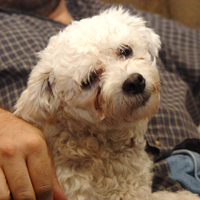 Spridle, whose name rhymes with bridle, is a one-year-old neutered male who is a recent addition to the HRI family. Although there were claims of an aversion to housebreaking training and some separation anxiety, sweet Spridle has had a few accidents in the house, but responds well to praise after pottying outside and even looks for a "good boy" after he's done his business. He also whines when his foster mom leaves, but has been kept busy with new toys and his foster family's other dogs. To say he has adjusted well to a new home and environment is an understatement!

"Spry" weighs about ten pounds. His coat is entirely white, and he has a very sweet, loving personality. He enjoys giving kisses and waits patiently for his turn with a bone. Spridle doesn't guard food or toys and is really enjoying playing with Charlie, in whose Hav home he is being fostered. He is learning how to jump onto the furniture on his own and loves looking out the window at passers-by. A future watch dog-in-training, Spry Hav-growls at the unfamiliar sounds and sights outside his new home, but is not at all "barky". In typical Havanese fashion, he sleeps on the bed with his foster parents at night, curled up at his mom's feet because the choice spots have been taken by the two Havanese that were there before him!

Spridle has his paws crossed that his hair grows quickly. His fur is very soft and wavy.

Spridle is being fostered in Wisconsin. He does well with kids of all ages: he came from a home with teenagers and his foster home has two young boys, ages 5 & 6. He loves men and women equally as well as big dogs (his previous home had a golden retriever and his foster home has a black lab). Spry will definitely need a home with at least one other young dog to play with and keep him company when his family leaves the home.