Buster is a young, puppyish 5 1/2  yrs old with a SILKY, silky soft ivory and cream-colored coat.  He is a sweet love-bug that wants to be cuddled and as close as possible to his people -- sleeping at your feet during the day, and snuggling up next to you for a night of tv. Then later, with his huge eyes asks to be invited up on the bed at night. 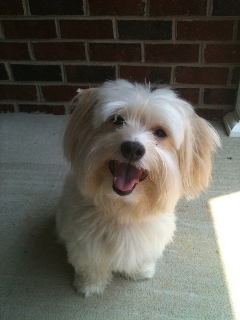 Buster has a very delicate frame of 12 1/2 pounds. He came into HRI a bit thin and with very little muscle tone, but his foster family is working on buffing him up. He's going on walks where he looks like he's walking 100 mph in his excitement, and romps with the resident Labradoodle who is ten times his size! He even likes the cats in the house.

Buster is the true Velcro Havanese -- waiting by the door for his foster mom to return, and jumps  on top of the sofa when his foster dad comes home.

Buster has so many cute mannerisms. He shakes his hair and it all falls back into perfect place at the end of each shake! He delights in finding dog toys and has appropriated a stuffed hedge-hog that he carries around the house. He tosses his hair to the side and looks up as if asking "what is that?" So cute!

Buster came into HRI anxious and a bit fearful of other dogs, but his three foster canine siblings have helped him work that out and they all get along well. He truly is enjoying the run of the house, the company of adults, teenagers and running outside! 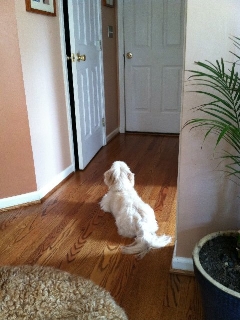 Buster has had a full veterinary evaluation as well as one by a dog behavior expert who agrees that Buster would do well with some doggy day care to learn dog cues.  He is housetrained and will readily use a wee wee pad if available.

Buster needs a home where he will have human company most of the day and who has either no other dogs or has an older, secure dog who can teach Buster how to be one.

BUSTER is being fostered in NC.

A donation will be requested to adopt this dog. The recommended donation amount will be based on the dog's age, and medical and behavioral issues, if any.ࠁ completed application is required if you are interested in adoption. Thank you for considering a rescue dog!